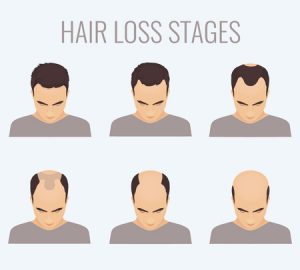 If you are male, where do you stand on the Norwood scale? This scale is not about your weight, men, but, rather, about your male hair loss.

With the Norwood scale, there are seven stages of hair loss. What’s the severity and pattern of hair loss of each stage? Find out here:

Stage 1: A man has no hair loss or hairline recession. You envy these guys. They have what you’d call a “full head of hair” and you think to yourself, “They must have great genes. Why don’t I?”

Stage 2: Around the temples a man has a slight recession of the hairline. A lot of men have this– it’s known as an adult or mature hairline. It’s so common that it’s pretty much seen as normal for older men over the age of 30.

Stage 3: This is the stage men don’t want to be in, because it’s the first signs of “clinically significant hair loss.” It’s when the hairline becomes deeply recessed at both temples. If you were looking at a guy whose hairline looks like the shape of a M, U, or V, he’s probably in this stage. Meanwhile, there’s the “Stage 3 vertex,” which is where there’s hair loss on the top of the scalp, aka the vertex. This is commonly known as a man’s “bald spot” atop their head toward the back. It’s very common, don’t you think?

Stage 4: Okay, with this stage hairline recession is quite pronounced, there’s no hair on the vertex, and the two main areas of hair loss are separated by a band of hair that connects to the hair remaining on the sides of the scalp. At this point, men are generally not too pleased with their hair loss.

Stage 5: Like Stage 4, but this time the band of hair between areas is narrower and sparser. It’s not looking good.

Stage 6: That “connecting” band of hair in previous stages is gone. Now the hair loss areas at the temple join with the spot at the vertex.

Stage 7: This is the most severe stage of hair loss for a man, whereas the only hair on his head that’s left is going around the sides of the head…

If you are in a Norwood scale stage that’s bothering you, contact NM Hair Replacement Studio (718-267-2516) and ask for a free consultation. You don’t have to suffer from hair loss!